Get more beads on your board sides than anyone else in the game.

1)      Choose the correct version of the board, according to the amount of players (the three player version is printed on the back side of the two player board and has the edges colored with three colors instead of two). Decide which player “owns” which colored edges of the board.
2)      Put 19 beads on the centermost hexes of the board (the center hex and two circles around it). 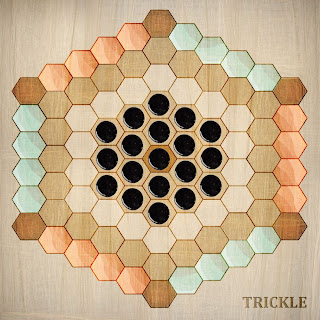 1)      Players act taking turns. On his or her turn the player must move one bead. Bead can be moved to an empty hex right next to it, or it can jump over one other bead to an empty hex straight behind it.
2)      When bead lands to the outermost circle of hexes, it can not be moved anymore. The beads can not be moved off the board.
3)      Beads can not be moved closer to the center of the board. They can only be moved along the circle they are on, or onto a circle closer to the edge of the board.
4)      When a bead is moved, the next player can not immediately move the bead back to where it was moved away. The bead can be moved back, if some other bead is moved in between.

The game ends when all the beads are on the outermost hexes of the board. The corner hexes are neutral and beads on them will not give points to any player. Calculate how many beads there are on each player’s sides. The player that has the most beads on his or her edges wins the game.
Take “just one more round quickly”. 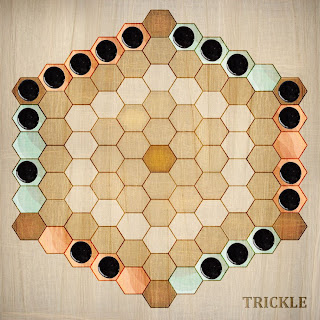